The Ed Kaihatsu billboard is back up on Chicagoland expressways.

This billboard first made an appearance around Chicago last year, and now it’s back. We discussed it on the pod during the first go round, but the epic bizarreness of its existence deserves a more thorough examination.

Except, here’s the thing: Ed Kaihatsu actually IS a Momentum Maker:  He’s one of the best assistant coaches in NCAA fencing history.

If you happen to be a member of the fencing community–as John’s wife Carly is–you are already nodding your head, but let’s clue everyone else in.   Ed Kaihatsu was Northwestern’s assistant fencing coach from 1989 through 2014.  This is a big deal, because Northwestern’s fencing program is really, really good.

Former Northwestern head coach Laurie Schiller famously won more than 1000 career matches, and Ed Kaihatsu rode shotgun for most of them.   With Kaihatsu as either the top assistant or the Associate Head Coach, Northwestern finished in the Top 10 nationally for 15 consecutive seasons.  During that stretch, the team was 512-76.

Consider this: The Northwestern Football Team has produced 12 All-Americans since 1970.

From 1998-2014, Kaihatsu personally coached FOURTEEN All-American Fencers–including, again, John’s wife Carly (All-American, Women’s Sabre, 2000).  If we include all of the selections of fencers who made All-American more than once, Kaihatsu coached TWENTY-NINE All-Americans in 16 years.

How esteemed is Kaihatsu in collegiate fencing?  How about this: In 2014, Kaihatsu won The Midwest Conference Coach Of The Year award AS AN ASSISTANT COACH.  No assistant has ever won Coach of the Year in Big Ten Football or Basketball. It hadn’t happened in Midwest Conference Fencing, either, and it hasn’t happened again since.

The point, though, is not that Kaihatsu is a fantastic coach. The point is that his photo is plastered all over a major marketing campaign…and that photo was chosen for reasons that had NOTHING to do with any of the accolades we just listed off! First Midwest Bank just liked his face!

To put this in perspective, consider this face:

This is Bud Foster. Foster has been Virginia Tech’s defensive coordinator since 1995. He has coached in a national championship game.  He won the Broyles award in 2006 as the top assistant coach in college football.  Like Kaihatsu, he has spurned outside opportunities to be a head coach at a top collegiate program.

If a bank put Foster’s face on a billboard, the average American would think nothing of it.  Many casual sports fans, however, would think “I know that face…” Serious sports fans, college football fans, and anyone from the state of Virginia would immediately ask why Bud Foster’s face was on a random bank billboard.  This…um…doesn’t appear to be happening with Kaihatsu.

Or how about this face:

This is Chris Dailey.  Only diehard sports fans know her by name, but serious sports fans certainly recognize her face: She’s been Geno Auriemma’s #1 assistant on the UConn Women’s basketball team for 31 years.  Still, despite Dailey’s unquestioned title as best assistant coach in college hoops, she’s basically anonymous in most of the America. It wouldn’t be hard to imagine her face popping up on a billboard and people thinking nothing of it.

Here’s the catch, though: If that billboard was displayed on Dailey’s home turf in CONNECTICUT, (as Kaihatsu’s billboard is displayed in Chicago) everything changes. Not only would everyone know exactly who Dailey was, everyone would assume she was paid a tidy sum to lend her celebrity to the advertising campaign.  Again…that doesn’t seem to be happening with Kaihatsu. 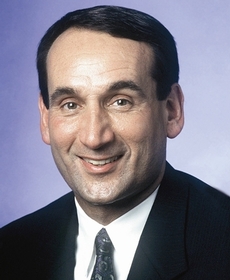 You’re most likely thinking, “This is a dumb example.  Coach K is arguably the most famous head coach ever.”

This man was Coach K’s top assistant as late as 2013. Like Kaihatsu, he was the #2 guy at a storied program led by a revered boss with more than 1000 wins. Now imagine seeing this face on billboards in Chicago.

You don’t have to imagine it, because Chris Collins’ face IS plastered on billboards around Chicago.  We’re pretty sure HIS face wasn’t randomly selected.

Ultimately, of course, this whole situation underscores the giant chasm that exists between “Revenue Sports” and the rest of the NCAA. Only in a sport like fencing could Ed Kaihatsu appear on billboards, in a national ad campaign for Victorinox, and in films and tv shows, as anyone other than “Ed Kaihatsu. ”  Heck, he even has an IMDB page.

For Kaihatsu, anonymity away from the fencing strip has clearly worked out well.  We’re happy to shine a light (A) On what a renaissance man Kaihatsu is, and (B) On how damn good our fencing program is.

Still, this is one more weird example of the Haves vs the Have-Nots in College Sports.  I mean, Tim freaking Beckman was once on billboards in Illinois, and it wasn’t because anyone liked the way his face looked.

We’re pretty sure Ed Kaihatsu is a better coach than Tim Beckman.