Well crap. Cat fans across the globe find themselves, once again, asking questions and pulling out hair. That was a very painful game to watch last week. As I mentioned on the podcast though, it was not nearly as painful to re-watch. The things that went bad came in bunches and at the worst possible moments. Two missed blocks on consecutive plays inside the 25; one step in the wrong direction against a go-route; a non-call block in the back on a critical 3rd and 12 completion. But it was the defensive revival in the second half and the offense putting together some drives that made me sleep well after watching a second time. There were many positives in that game, and all we can ask now is that the team build on those positives and get better going into the Northern Illinois game, which should be a more favorable matchup, albeit still a tough one given the way they run and play run-D, and losing yet another of our playmakers.

I just read a great piece on Lake The Posts regarding a reader email pointing out the terrible start of the 2009 season. Many of us (myself included) think about that season as the height of our offensive passing game, probably because of the way it ended (wins vs Iowa, Wisconsin, & then the Outback bowl.) We’ve cited 2009 as evidence when we’ve talked on this podcast about offensive conservatism, and how we need to release the kraken, get back to our passing ways and pile up the points. Well after reviewing the numbers, I may need to step back and give this current coaching staff some more credit…

The most efficient scoring offense NU has fielded in the past six years was 2011, followed by 2012. Last year’s offensive in total was actually right on par with the Kafka and final CJ Bacher seasons of 2009 and 2008. The other interesting observation about those years: NU eclipsed 35 points once in ’08, three times in ’09 in each of the first four games last year before the team went off the rails. Who was calling the offense in those games? Mick McCall. Who was at the helm of the offense in the some of the best games from an output perspective since 2012 (IU ‘12, Cal ‘13, IL ‘13?) Trevor Siemian. Maybe, Fitz and co deserve some recognition, specifically around the retooling of the defense over the past three seasons (downward trajectory in opponent scoring efficiency since mid-way through 2011,) and the fact that NU’s offense has never scored as efficiently as it did in very recent history. Frankly, these data points should give us a lot of hope. Look at 2009 on the week by week chart below – the offensive and defensive efficiency then are basically identical to what they are for NU right now. While we tear our hair out play-by-play because we bleed so much purple, perhaps the current Fitz formula is a little closer to what we long for and recall from recent glories than we realize.

Unfortunately, rancor has developed between the fans, media, and coaches (as can often happen in sports,) and I think that has colored everything in such a negative light for the last twelve months. I believe there is cause for criticism of the staff, particularly in the way they approach some of the key decision points that arise during games – this was articulated perfectly by The Daily this week – and it is clear the preparation and game speed were not where they needed to be in last week’s opener. Stepping back and considering everything that occurred in the last twelve months, perhaps the Cats are much closer to where we think we want them to be, than it feels or appears. 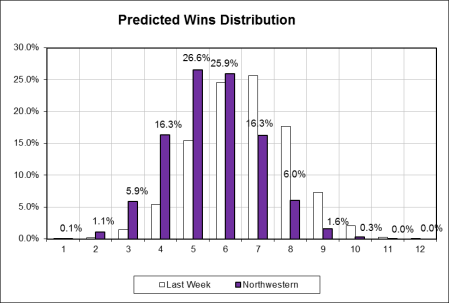 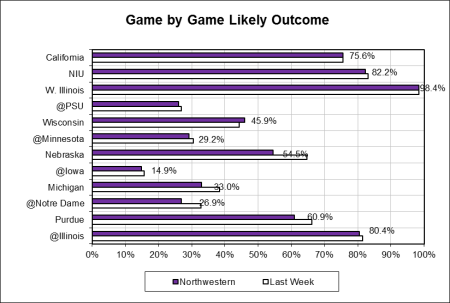 What a terrible week for the Scuzz Model. To be fair, most prognosticators got drilled in week one… all the conventional wisdom was out the window. Scuzz Model did have some great calls (Auburn, Temple, UTSA, Wisc), but had many near misses (Tulane, North Texas, Navy, UConn, UCF, Purdue), and a whole lot of big misses (Bama, Bowling Green, Wazzou, NU, Texas A&M, FSU). Here’s hoping we do better in this week’s picks:

Note – this is going up late, and I’m really ticked I can no longer pick UTSA to cover vs Arizona, which they did last night (and almost won).

Michigan State (+12) @ Oregon: This pick terrifies me. It’s based on three things – MSU being similar to Stanford, Oregon’s diminishing presence on defense in the last couple seasons, and most importantly, my belief that until Pat Narduzzi leaves, MSU has a significant coaching advantage over everyone they play. The model sees this as a toss up… I think Oregon still wins, but MSU should be able to keep it reasonable.

Pitt (-4.5) @ BC: The Pitt Panthers, recent victims of poor coaching and fleeting coaches, look like a potential sleeper in the ACC this year (at least until the title game) as Paul Chryst gets more and more comfortable. They have a powerful run game, and I really like their chances to smoother a rebuilding BC. The model favors Pitt by 8.

Michigan (+4.5) vs Notre Dame: I keep going back and forth on this one, as both teams have something going for them (Golson for ND, new Offense for Mich). Ultimately though, this game has been close for years, I expect both teams to score, and for it to come down to a 3 or 4 point deficit in the end (someone kicks a FG to go up 3, the other scores a TD to go up 4, and it comes down to the final drive). The model likes Michigan to win, but really we’re just taking the points here.

Stanford (-3) vs USC: Too early, IMO, to go all in on USC yet… I don’t believe they have rebuilt their depth to go toe-to-toe with a heavy like Stanford. The Cardinal, similar to Oregon, are probably not going to ever be quite the same as they were under the previous coach, but they are still fantastic, deep, and hard to prepare for. Model likes Stanford by a TD.

Auburn (-30) vs San Jose State: If it ain’t broke… Auburn came through for me twice last week – winning big but not by too much. Their offense is maybe even better than it was last year, seeing that they have real QB depth behind Nick Marshall. This week, they get to start with Marshall, and play an even weaker team than Arkansas. I won’t type how much the model favors the Tigers – it’s embarrassing.

We almost had pandemonium last week as Ok State made everyone’s predictions for that marquee game go awry. We also almost had Wisconsin leaping into the upper half of this chart, but alas they can’t throw the ball.

The same 4 teams are still heading the Scuzz Model’s playoff prediction – Bama has dropped off in likelihood of going undefeated, mostly due to the performance of Ole Miss and Auburn, but there is little reason to not favor them at this point. Several teams from last week’s conversation that blew up include Houston, South Carolina, & Wisconsin; UCLA looked pretty far from a team likely to make a run, despite their victory. Next week you will either see MSU or Oregon get a big boost – they are huge obstacles for one another in this chase. BYU, Stanford, and Michigan all might show up next week as well, pending their weekend outcomes.

Posted on September 5, 2014, in Saturday Morning Stats. Bookmark the permalink. Leave a comment.