#B1GCats:
Despite the result, it kills me that I couldn’t be at last week’s game in person. The spectacle, intensity of play, and effort from the Cats were incredible. I will, however, be present in Madison this weekend, to watch the Cats surprise the pundits again by giving Wisconsin more than they can handle.  Check out our recap pod, where we also discuss Wisconsin in depth here.

Despite playing above expectations, NU’s profile took a hit this past weekend. The subpar performances by Cal & Cuse couldn’t have helped. I’m not convinced though – based on what we saw on Saturday, this team is for real, and should win 9 games, maybe more. The model is not as opitmistic, with 8 wins as the most probable outcome right now. 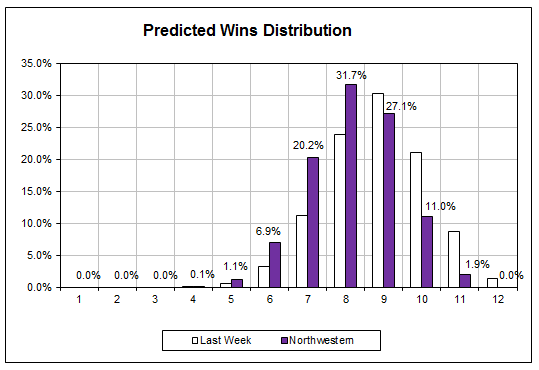 There is nobody that likes the Cats this week against Wisconsin – the Scuzz model is more bullish than some, calculating the Cats chances at 30%.  This seems surprising though, given that Wisky was absolutely dominated by OSU a short two weeks ago.  Everyone is referencing the bye-week as a huge advantage for Wisconsin, but there are many examples of the bye week being a trap, and Northwestern fans need to look no further than our 0-fer streak post-bye in the Fitz era.  The other common element cited by many is the Wisconsin run game – surely if OSU can pound the rock, UW can too.  My counter – we played with 6 in the box for much of the OSU game, putting a LB in coverage; Nate Williams at Inside NU also described how our safety positioning vs the OSU pass game took them out of their usual run-support roles.  That said, our interior D line has not been as strong as it was last year.  Will Wisky run well and score points?  Absolutely.  But we can sell out against that run, and force Stave to beat us whereas last week, the game plan was contain Miller and the passing game.  Will the Badgers effectively outscore our Offense?  They couldn’t come close vs Ohio State… so I like our chances.

Good week for the computer, but bad choices by me.  Overall 58% ATS this week, but I failed to reach .500. Here are this week’s picks:

Kansas State (+19) vs Baylor: The Bears leave Waco for the first time this week. They’ve played nobody yet, gave up a ton of points to WVU, and I think they’re due for a shootout, rather than a blowout. Model still has Baylor by 2 TDs.

Missouri (+9) @ Georgia: I don’t particularly like Missouri, but Georgia’s injury and defense problems make me think this will be closer than 9 points. Scuzz model has GA by 7.

UCLA (-24.5) vs Cal: Not good for NU fans, but after seeing Washington State destroy Cal last weekend, I have to think UCLA will roll at home. The model has Bruins over Bears by 35.

Nebraska (-14) @ Purdue: I just feel bad for Purdue at this point. Their defense is somewhat better (I hesitate to call it a strength) against the pass… but I think it’s because most teams haven’t bothered to throw much. I don’t believe the Boilers have a way to slow the Nebraska running game, which is all that should be necessary here, even with Danny Etling on the field for the Boilers. Model likes Huskers by double the published line.

Northwestern (+10.5) @ Wisconsin: I do like NU this weekend.  Wisconsin’s running game is strong, which I presume is the rationale for the large spread in this game, but their offense is not the same deal as OSU.  My biggest concern is a letdown after the hype of last week – but this is a spot Fitz & crew have been prepared for all year.  The model has the Badgers favored by 6.

Already Obsolete BCS Championship Hunt:
We won’t dwell on last week’s changes… There doesn’t appear to be anyone really in jeopardy of losing this week. Oregon and Stanford have tough matchups, Baylor and Bama go on the road, but really should win. I guess the most interesting piece is if Missou beats GA, they could make an appearance on this list next week.  Michigan too, if they emerge victorious in State College.  The big story though, to watch at the end of the year, is what happens to Louisville.  They continue to roll, dropping Rutgers last night, and really should be undefeated at the end… and will clearly have played nobody.  As such, I contend the death throes of the BCS should fittingly end with two 1-loss SEC teams jumping undefeated Louisville to play a rematch in the Championship.  Long live the BCS(ec).

Posted on October 11, 2013, in Saturday Morning Stats. Bookmark the permalink. Leave a comment.