#B1GCats:
Another sigh of relief this week, although unlike WMU, the Cats were never down in this game and it never appeared Maine would get close; up 21-0 the coaching staff pretty much scuttled the passing attack and let the Cats grind it out. Maybe it was a test for the oline, maybe it was to keep things vanilla for OSU, maybe it was just good old Fitz-ball coming out to play. Yes, there are some concerns in the secondary, and with the run D, but I still feel we’re ahead of where we were last season. The B1G schedule does us no favors early, but I’m confident our offense can score with anyone, and that gives us a chance in the first two B1G contests.

After a reader commented that my conclusions were a little off last week, I took a look back at the numbers to understand what went wrong. I had been under a certain impression of what the model would project and had written my post based on that – rather than the actual data the model had produced. As it turns out, the model had erroneously flipped the NU-Cal score, and was chalking that up as a loss. So, after correcting that issue, the comment I made last week that 9-10 wins are expected is back on the table and supported by the data.

I know there is a lot of concern among NU fans that the team can’t compete w OSU or Wisc. But we don’t need to beat either to get to 10 wins or to win the division. Let’s remember that Nebraska gave up 20 to S. Dakota St. this weekend (and was behind at one point). Michigan almost lost to Akron (close to the worst team in 1-AA) and UConn (tho being on the road, I’m not as concerned w that one). Western Mich was terrible against Iowa, but only lost to MSU by 13. Hell, Georgia gave up 21 vs. North Texas this weekend! The sky is not falling folks… I know last Saturday was a really frustrating game, but there is a huge difference from what this NU team has done in the non-con vs. the tight spots of NU teams in the past against inferior competition. I think we’ve also seen a lot of evidence the play-calling was adjusted… Jeff Schell on LTP pointed out zero double-post pass plays (a staple of the NU attack), others have pointed out odd personel combiations, and I noted on the pod we had only had 5 first half offensive possessions – down from 7/8 the first 3 weeks. There’s no doubt in my mind that we’ll be ready for B1G competition in two weeks.

Knowing I was travelling last Thursday, I did most of my prep for last week’s picks early in the week. I wrote up picks for 7 games, and then chickened out on Thursday on my USC-USU and Rutgers-Arkansas picks. Dang. Those would’ve been a lot more fun than UF-UT, and IU-Mizzou. The model was again over 50% for the week, but dropped off from the high in week 3. Now is when Vegas has started to figure out some things, so the sledding gets tougher. Here are this week’s picks:

Miami (-18.5) @ South Florida: To say South Florida has looked bad this year is an understatement. They have lost twice at home to inferior opponents. What will the do when a superior opponent w an awesome offense (unlike MSU) comes to town? Model likes the Canes by 23.

NIU (-3.5) @ Purdue: Purdue was again exposed against the Badgers last week, and looks to be in for a rough season. Even though this is a home game, I like NIU to come though – they’ve already won a tough game on the road in the B1G this year, and are favored by 21 in the model.

Texas A&M (-14) @ Arkansas: Like I said on the podcast. #Karma. I voiced this opinion two weeks ago, and have heard it elsewhere… somehow post-Bama game, I like Manziel more than I did before. I expect and hope he goes tazmanian devil on the Beilimas and Arkansas this weekend. Model likes the Aggies by 27. (Note – my dislike for A&M is still high. I have at least a 10 year cooling off period after bowl losses; except for the UCLA juggler… that grudge will live forever)

Alabama (-16.5) vs Ole Miss: There are many people calling for this to be a tight game, where Ole Miss pushes Bama w their super talented WRs similar to A&M. The difference to me? The game is at Bama. This could certainly be tight, but I’m confident enough that the Tide can dominate to pick it. Model has Bama by 22.

LSU (+3) @ Georgia: This should be a very entertaining game. LSU looks competent on offense and by mid-November everyone may be talking about their defense again. Georgia’s O looks unstoppable. I am banking on the SEC west here, and the fact that this might be a really tight game. Model likes the Tigers by 6.

Already Obsolete BCS Championship Hunt:
I have been surprised for the last 3 weeks that NU hadn’t made this list, but as mentioned previously, I was data challenged, and had been cheating the Cats of a win in the model. As such, I’ve revised and now, lo and behold, NU shows up with a 2% chance at going 12-0 (note that is down from 3% last week, namely due to Iowa & Wisconsin’s performance).
Nobody was knocked off last weekend (though Clemson and NIU flirted with the possibility). This week LSU, OSU, & Central Florida are all at risk with tough matchups. 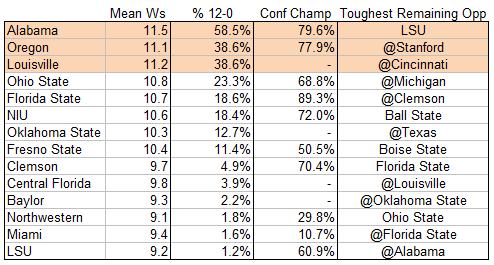 Posted on September 27, 2013, in Saturday Morning Stats. Bookmark the permalink. Leave a comment.