In a dominating performance last weekend, the Cats have passed their first 2013 test — getting through two tough games (opponent, timing, travel, expectations) to start this season.  Now that last word – expectations – is bigger than ever, with the QB play, defensive TOs, and gaudy numbers, NU fans haven’t been this high since the year 2000 (if not earlier). Now two “should-win” games will test if the Cats can be consistent and execute thoroughly against weaker talent.  The Scuzz model is very clear on Western Michigan – this should be a straight forward win for NU.  As we discussed on the pod this week, we’re just looking for solid execution from the starters, adjustments and good execution to start the 3rd Qtr, and a healthy dose of backups after that.

A little better shift for NU in the projections this week – as mentioned last week, I did exclude UMass from the model afterall – but Michigan and Illinois made up some ground on the Cats.  Wisconsin, Ohio State, and Nebraska (obviously) are still the big matchups – the model likes NU against Michigan right now, due to home field – on a neutral site, UM would be favored slightly (54.5% favored). 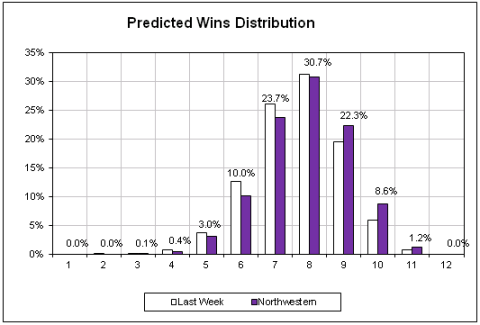 The Model had a fantastic 2nd week – over 65% vs the spread. I however, choose poorly… I will still defend my IL v Cincy pick – that was a freak game, with Cincy playing flatter than flat, having some bad luck plays and then the injury to Munchie.  Tho many say picking against a home dog is bad idea…. I’ve tried to avoid that this week.

Here are this week’s picks – I’ve included 2 of the B1G-P12 matchups (the Scuzz Model lines on the other two scare me, but I’ll note them below for reference):

Oregon -27.5 vs Tennessee:  This is a huge line.  But do you really think Oregon can’t cover it?  Tenn has to travel three time-zones, plus has Florida on the mind next weekend.  The Ducks?  They’re just rolling on O under Helfrich, and playing a ton of super talented guys on D as well.  Lets just say the Scuzz model is really confident about this game.

UCLA +4.5 @ Nebraska:  Perhaps Nebraska’s D has improved since week 1, but even if the have, this will be a shootout, and frankly a shootout I think UCLA will win, even in Lincoln.  Brett Hundley will have his way with the Nebraska DL, which is their weakest spot on an unsettled defensive unit.  Model likes UCLA by a FG.

Wisconsin +5.5 @ ASU:  Wisconsin was an enigma for the model last year… the numbers always wanted the Badgers to roll, but they rarely blew anyone out.  This year, I’m a believer in the Melvin Gordan and James White.  I also think this coaching staff is an upgrade from Beliema in ’12.  I really like Wisconsin to surprise ASU on the road – Will Sutton is a great DT, and their line is formidable… but ASU isn’t used to this type of offense, and was actually pretty bad against the run last year too – their defensive line is great at rushing the passer, not so much stopping the run.   The model favors UW by 1.

UTSA +26.5 @ Arizona:  I have wanted to pick UTSA both week 1 and 2 to cover the spread, and haven’t had the guts to do so.  This week, they are just too overlooked to ignore anymore.  Zona will have a good offense under Rich Rod, but their D is rough, and UTSA can score (they put up 35 against Ok State last weekend).  I like the Road Runners to keep it within 3 TDs (though the model thinks they’re only 16 points worse than the Wildcats).

Louisville -13 @ Kentucky:  This one is close – the model likes Louisville by 14, but I love Teddy Bridgewater, and the model still doesn’t quite know how good UL is compared to last year.  Kentucky certainly is showing some pop early on, but they will be no match for the Cardinals.

Florida, Notre Dame, South Carolina, USC, Texas, Cincinnati… all gone from the ranks of the undefeated.  Emerging above their remaining peers, are Alabama and Oregon, who look to be the creme de la creme.  Obviously the big game this week could derail Alabama’s run at 3 in a row, but I feel good about the Tide (just not the line).  I think eventually UL will be looking real good to go 12-0, but doubt they’ll actually jump 1-loss SEC, ACC, or even B1G teams for the title game (same w NIU & BGU).  Best dark-horse chance from those under 10%?  I like Oklahoma State…  they certainly have a couple tough games (OU, Baylor) but I like their chances to run the table, assuming they aren’t derailed by the recent allegations.

Posted on September 13, 2013, in Saturday Morning Stats. Bookmark the permalink. Leave a comment.