#B1GCATs:
Last weekend was a strange experience: the Cats have certainly had night games before, but not to start the season, and not 2.5 hours later than usual central time kickoffs. It was a odd watching and waiting so long for our game, but it was definitely worth the wait… as we discussed on the podcast this week, it felt a little like an escape, getting out of Cal with a win considering our injuries, their strong play, the location of the game, etc.

This week NU kicks off the home opener with a familiar foe – Syracuse.  The Orange did exactly what was expected by the Scuzz model last week – lost by 6. Against the Cats, they’re projected to lose by 14, which is pretty close to the published odds out there. If Colter and Mark are 100%, I say there’s no chance the Orange cover, but injuries are a hard thing to project against. Either way, NU is a big favorite in this game and it should be an enjoyable home opener for those in attendance (time to takeoff: 8 hours).

NU’s season projections actually took a hit in week one, and have come down a little. The culprit? Wisconsin… with their dominant performance against Massachusetts, the Cats now have only a 14% chance of winning the game in Madison.  Don’t fret though… last year, I felt it necessary to adjust the entire model for how bad the UMass Minutemen were – they still perform more like an FCS team, and had a great overvaluing effect on the teams who got to play them out of conference. I’ll be monitoring to see if that adj needs to be implemented this year as well. 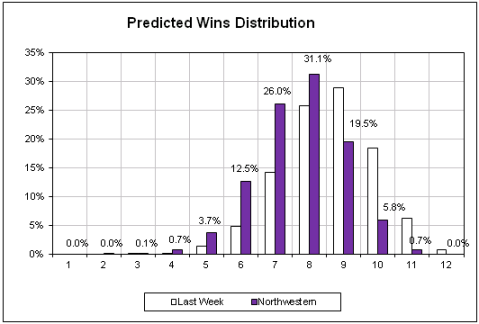 There are so few worthwhile games this week, I’m only going with 3 picks:

Cincinnati -7 @ Illinois:  Play the hot hand, my friends.  We all saw what Cincy did last week.  And we saw what Illinois did last week.  The model has Cincy as 21 point favorites.  Go Muchie Go.  Also, if the over under on sideline infractions in this game is 0.5, I’m taking the over.

Notre Dame +3.5 @ Michigan:  Last week, Michigan rushed for 242 yard in their blowout vs. Central Michigan.  This week, they’ll get 1/3 to 1/2 of that number.  Can their passing attack make up the difference?  The model likes the Irish by a FG, while the line favors Michigan.  I think these two teams are very close, and that the game comes down to just a couple points – 3 at most in either direction (very possibly a missed ND FG at the end will decide).

Arkansas State +13 @ Auburn:  The great Gus Malzhan faces his former team… here’s the thing – Auburn struggled to score on Washington State last week, winning 31-24.  I think Arkansas State is possibly a better team, and should be able to keep this closer than two TDs.  Scuzz Model favors Auburn by 4.

South Florida +22.5 @ Michigan State:  I’m throwing this one out, to highlight how little the model thinks of Michigan State’s offense.  Caveat – the USF loss against an FCS team last year doesn’t factor into the model (I throw those games out).  Still, USF was bad last year… the line here is huge, but the model only likes MSU by 16.  I’m not convinced USF is as bad as last week showed, and I definitely have zero faith in the MSU offense.  (For context, the model correctly picked MSU to not cover last week vs WMU).

Two down, so many more to go.  Georgia & Oregon State fell of this list last week w their big loss.  Others really improved their stock – Louisville in particular looked so good in dismantling Ohio, they have leaped in the list (don’t forget Ohio is a pretty good team) – you can see how much Wisconsin leaped by beating UMass (from 2.9% LW), and NIU gets into double digits, after beating Iowa (notice that Iowa is not the toughest team on their schedule though). 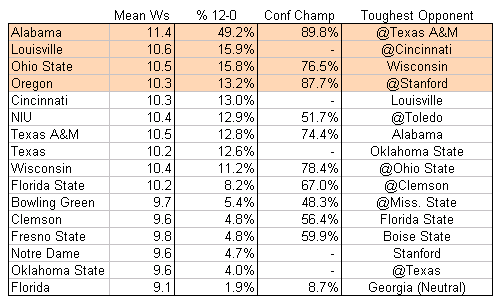 Posted on September 6, 2013, in Podcast. Bookmark the permalink. Leave a comment.