It has been way too long since there has been football; it has been equally long since there was a Scuzz Model post!  After a needed offseason breather (to focus on a paying job, and to lick wounds from bowl season) the Scuzz model is back up and running in 2013.

You may have noticed that the model updates during bowl fortnight last year went dark… well, lets just say the model fell short of previously lofty performances during the college football postseason and yours truly got sulky (I was also distracted by such events as Northwestern-wins-a-bowl-game).   Just to close the door on 2012, here are the final stats:

Biggest lesson learned… some basic psychology things  (like USC and Florida don’t care about their games) would’ve really helped the model.  Even though the ATS picks went south, the model still did pretty good straight up in bowls and kicked my butt in the confidence pool.  The good news is that the games I highlight weekly on the blog had the best rate against the spread.

Excitement for this year’s NU team could not be higher.  As you can see below, the Scuzz Model is on board with this excitement as well!  The model clearly projects 9 wins for NU and only sees the game at Wisconsin as a long shot victory.  The non-conference slate in particular looks much easier than last year – I know most NU fans are worried about the difficulty of this year’s schedule, but that really only pertains to the Big Ten season… the negatives of adding OSU and Wisc are balanced a little by the Vandy-dodge and the drop-off at Cuse.

NIU +3 @ Iowa:
I’m so excited for this game. We’ve been all too happy to talk Iowa this offseason, meaning we don’t think too much of them. This matchup w an NIU team looking to prove itself after last year’s Orange Bowl will not be the start Ferentz and the Hawkeyes wanted. Scuzz Model has NIU by a TD.

Cincinnati -10.5 vs Purdue:
The model loves Cincinnati this year, favoring this team over Louisville to win the Big East (it will take me at least one year to adjust to the new conference name). I don’t think much of Purdue so the Bearcats roll in this opening game goes well. The model likes Cincy to win by 3 TDs.

W. Kentucky +4.5 @ Kentucky:
Do you believe in Bobby Petrino? I’m lukewarm, but I do believe that Western Kentucky is good and that Kentucky is not good yet (their recruiting suggests a turnaround over the next couple years). Petrino certainly knows enough about playing in the SEC to prepare his team for this game. The Model is too bullish on W. Kent for me (favored by 6), but I like this game to come down to a FG.

LA Lafayette +10.5 @ Arkansas:
Bret Bielima’s debut in Arkansas is against a team that came oh so close to beating Florida last year, and averaged almost 40 points per game. I don’t know what to expect from Arkansas this year, but dominance is not at the top of the list. 10 points just seems too big… Scuzz Model favors Arkansas, but only by 2.

Northwestern -5.5 @ Cal:
I’m all in on NU this week. This team should be better than last year’s, and this Cal team is not better than Vandy or Mississippi State from last season. The Cats won both of those game by enough to convince me that NU can beat Cal by a TD or more. Especially knowing that Cal is young in the middle on defense gives me the feeling that the Cats can put this game away w their superior running game. I won’t type what the model thinks, but it really likes NU here.

The Obsolete BCS Championship Chase:
The BCS is in its death throes as we observe one final season of this obsolete championship model. Will Bama 3-peat? Will another SEC team continue their conference’s dominance? Will the ACC, B1G, Big 12 or Pac 12 find a viable challenger? Here’s how the model sees the Championship race, looking solely at the likelyhood for teams to go undefeated in the regular season. The Conf championship indicator projects a matchup against the highest rated possible opponent for each contender. 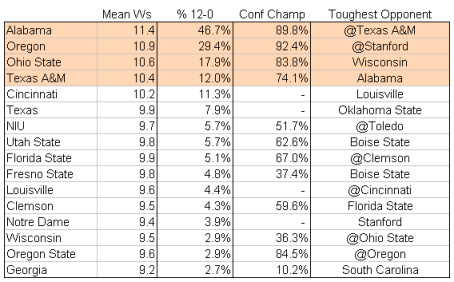 Posted on August 29, 2013, in Saturday Morning Stats. Bookmark the permalink. Leave a comment.