As Sam so aptly quipped in our last podcast, ESPN’s bowl fortnight has begun.  After a couple of exciting games last weekend, the Scuzz Model 2-0 in confidence picks, and 1-1 vs. the spread.  Before we get into this week’s picks, let’s do some digging on the NU – Mississippi State matchup on Jan 1.

I tried to explain the following on the last podcast, but may not have done a very good job.  Visual aids are always helpful too…..

The charts above show, game by game, how a team performed from an efficiency standpoint compared to the Scuzz Model’s expectations.  Let’s start with NU’s chart, which I have posted previously.  The good news for Cat fans is that the team has out-performed expectations for six weeks straight.  I think the story is validated when you consider NU’s three best games this year were probably Vanderbilt, Iowa, & MSU… and those are the games where the model shows the best performance vs. expectations.

Now consider Mississippi State.  Immediately, you see there is no pattern like we see with NU.  This may be the difference between a more upper-classmen laden team like the Bulldogs – week to week improvement is not as visible due to their experience compared to a younger team like NU.  MSU seemed to perform relatively close to expectations through the middle of the year, but had outlier performances on either end… boding well for NU is that MSU underperformed in 4 of their last 5 games, including their worst of the year in the last week of the season.

All this made me want to look at MSU’s week to week efficiencies compared to NU: 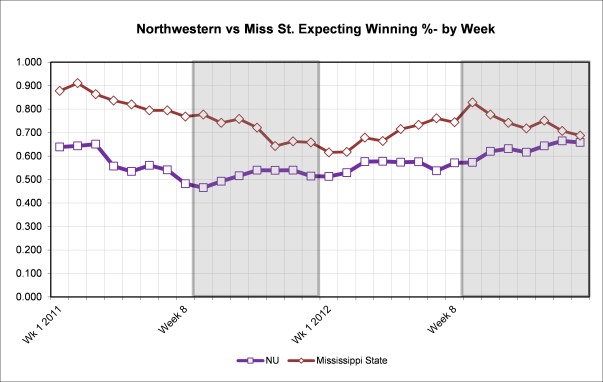 Something very interesting shows up when you compare NU and MSU’s week by week efficiencies.  In each of the last two years, NU has shown an upward trajectory in efficiency from about mid-season on (shown in the grey-shaded section).  MSU has shown the opposite – a steady drop-off in efficiency.  Will this continue into the bowl?  I don’t know, but it is clear that Northwestern teams over the last two years got better as the year progressed.  I personally believe we outperformed expectations in each of the last 4 bowls, which supports this concept as well (no wins, but again – think about the quality of those opponents, and the fact we were down one Dan Persa vs Tx Tech).

And, while we’re talking about bowls, I’ll remind you that MSU beat a pretty weak Wake Forest team in a bowl LY by only 6.  This year’s version seems to be relatively on par (at least efficiency-wise), but I argue is facing a much tougher opponent in Northwestern.

A solid finish on the regular season.  Overall the model was pretty darn good on picks going 55% vs. the spread.  The blog picks were even better though (maybe I do know something about CFB… sometimes it seems like a crapshoot).  We continue with bowl picks, but this week is going to be a little boring.  The model has picked nothing but favorites through Christmas.  There are some more interesting games next week, so I’m making my 5 picks for games through the 27th.

Poinsettia Bowl (San Diego, Thursday)
BYU (-3) vs SDSU:  Model has BYU winning by 8… their D should be good enough to shut down the Aztec running attack, but if they give up a couple early scores they’ll be in trouble cause the BYU offense is borderline non-existent.

New Orleans Bowl (Saturday)
LA-Lafayette (-4) vs ECU:  I don’t like ECU at all, and the Cajun’s took Florida to the wire.  I think they are more tested, have more athleticism, and will win this one.  Model has LA-Laf by 9.

Las Vegas Bowl (Saturday)
Boise (-6) vs Wash:  I keep seeing comments about Wash having a shot cause they beat Stanford, and held USC in check.  They won’t have their 12th man in this game though, and on the road they’re a different team altogether.  Model likes Boise by 8.

Belk Bowl (Charlotte, Thursday)
Cincinnati (-10) vs Duke:  Apparently the line on this has dropped closer to 7… I’m not buying it and neither is the Scuzz Model.  Unless the Bearcats are despondent over Butch Jones leaving (I doubt it), they should romp in this game.  Scuzz Model likes them by 3 TDs.

Holiday Bowl (San Diego, Thursday)
UCLA (Pick) vs Baylor:  This should be a really fun game to watch.  As you’ll hear us discuss on our next podcast (up tomorrow or Friday) John likes UCLA to run away, while I think Baylor has a chance if they can slow the Bruins’ running game.  The model has UCLA by 6.

More to come next week.  For now enjoy the bowls, and keep tabs on us via Twitter (@WestLotPirates) – we’ll be sharing thoughts and commentary throughout Bowl Fortnight, including updates on the standings in our Bowl Challenge.