Well folks, we’re here at the end once again.  I won’t lie and say this season has lived up all my hopes, but the Cats got what was the closest thing to a signature win last weekend, so I’ll take that.  Now we need to punctuate it with a beatdown of Illinois.  Give No Quarter.

I quipped last year, that this is probably the most boring week for the Scuzz model.  The model’s real value is simulating across multiple games, rather than looking at individual ones.  Still, here are the updated projections for NU. 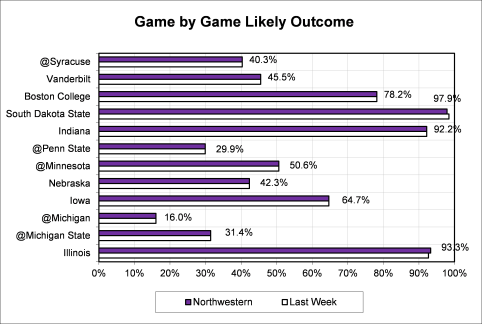 The model has loved the IL matchup pretty much since week 3.  As Northwestern fans, we all know better than to take this game for granted, and the team & coaches know that as well.  One of the nice things about finishing the season with your rival is the added motivation that keeps you honest even in a mismatch…  but the other side is motivated too, and they’ll be fired up to put a black mark on NU’s season.

From a numbers perspective, I wouldn’t TOUCH the 19.5 point line on this game.  Scuzz model has NU by 20, but we all know that the likelihood of that is slim.  However, I still feel great about getting a win – the Cats haven’t lost to a team they were favored to beat all year.  Even without the rivalry aspect, there is still a lot to play for with bowl matchup, Fitz’s 49th career win, and the possibility for a 10-win season.

I also think that after the way the game was won last week, the Cats won’t tighten up if it’s close down the stretch.  I think the senior leadership on this team really proved itself last week (esp on D) and the whole squad is going to come into this week feeling real good and ready to roll.

The fact is that Illinois has a terrible matchup with our defense.  They don’t have the passing game or talent at WR to take advantage of our biggest weakness.  They also don’t have the chops at RB to be anything more than one-dimensional once the Cats O puts up a couple scores (I don’t think they have an answer for our running game either… esp with their injuries at LB).  With all that said, a plea… don’t let up on the gas in this game.  Ever.  Bring everything we have, shove it down their throats, and Give No Quarter, until the last second ticks off the clock.

Ouch – first losing week on the blog since Week 2.  I guess that happens when you pick teams like Kansas State that are playing with destiny and liable to blow it cause they haven’t played anyone (too soon?).  That said, the model was great overall, going 58% for the week in total.  Here are this week’s picks:

Texas Tech (+2) vs Baylor:  Classic letdown spot for Baylor here… after a big win, on the road.  Frankly, the Bears got a little lucky IMO with some injuries to KState.  Also, Tech excels at throwing the ball, so they will not be phased should Nick Florence put up gaga passing stats.  Model has Tech by 2.

Iowa State (+1) vs West Virgina:  Have to admit, I’m a little surprised to see this, but the Model favors the Cyclones by 5 points in this game.  I definitely believe they can beat WVU… everyone talks about that passing offense, but my opinion is that a good run D has been able to slow WVU down.  ISU has such a run-D and plays well at home (they almost beat KState too).

Rutgers (+2) at Pitt:  In honor of the Big Ten’s crazy manifest destiny, I’m going to take Rutgers here.  The model likes the Knights by 1 over Pitt, and I see no reason they should lose their first Big East game this weekend.  Plus, it’s not like Pitt is going to conjure up some “how dare you leave the Big East” mojo to take this game.

Maryland (+23) at North Carolina:  While we’re at it… more manifest destiny picks.  This one actually gives me a bit more heartburn… am hoping for some MD pride to come through, and for the UNC players to be looking ahead to next season.  23 seems like a lot of points, and the model has UNC favored by only 19.

Notre Dame (-4) vs USC:  For the record, I hate this pick.  But the model likes ND by 8, so I am compelled to put it out there.  I do think that no Matt Barkley + no defensive line = bad day for the Trojans.  Let’s be honest, USC’s hair will be on fire in this game, but I think they will be outmatched.  Manti Te’o is essentially playing for the Heisman, and the matchup just favors ND because of their running game and defense.

This has been one of the more entertaining Championship races, in that everyone keeps screwing up.  Unfortunately this has let the SEC back in, but in some ways I feel they need to be directly knocked off their throne, rather than kept out of the title game altogether.  The undefeated race is a little boring at this point, since OSU doesn’t really count.

Since there’s not much here, let’s look at who else has a chance, should ND fall to USC, or something crazier.  Alabama has clearly the best shot to retain their position, with a 99% chance this weekend, and then an 85% chance in the SEC title game vs. Georgia.  Oregon’s chances of getting back in the mix are predicated on Stanford losing to UCLA (35% chance)… that, plus a tough matchup vs. OSU puts the Ducks on the outside looking in.  KState similarly has too much ground to make up (Texas losing tonight didn’t help).  Florida State, however, is well positioned with a home game vs. the inconceivably 4th ranked Florida Gators.  Should FSU win, and go on to win a heavily favored matchup with GT in the ACC title, they would be next in line should ND or the SEC falter (the latter would require Alabama or Georgia losing this weekend, and then the loser beating the other in the SEC championship).  There are also some options for Florida to back into the game as well, like Alabama did last year.  To knock the SEC out entirely… prob need GT to upset Georgia, then Georgia to beat Bama, plus an FSU win over Florida.

To sum all that up….  Likeliest Championship Matchups and estimated likelihoods:

For Oregon (0.1%) or Kansas State (0.8%), the only option is ND loss + SEC implosion, and then they would play probably the winner of FSU-Florida.

Posted on November 23, 2012, in Saturday Morning Stats. Bookmark the permalink. Leave a comment.