As you heard on the podcast this week, we are feeling good about tomorrow’s game.  The matchup pits strength on strength for both teams on both sides of the ball, so this could be a question of which team blinks first.

As I mentioned, the Cats outperformed expectations this past week against Michigan (if not in our hearts and minds, then at least statistically – see the Expected vs. Actual chart below).  As such, not a lot of movement in either the MSU or IL projection. 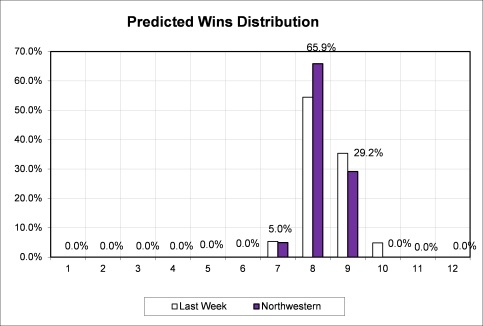 Clearly the model loves the IL matchup, but has major reservations against MSU.  The line is Spartans by 6.5, while the model sees things more in the -5 to -3 range for MSU.  A lot of that is the impact of home field… were this game in Evanston, the model would take NU by 1.  What does that all mean??  Probably another nail-biter folks.  Though I think this game will resemble the Iowa matchup more than anything else we’ve seen in the last few weeks.

One of the things buoying my hopes last week was NU’s continued progress the prior three game in outperforming expectations.  Didn’t go as well vs. Michigan, but still a positive figure on the graph.  The real kicker this week is MSU’s defense, which is 6th in my efficiency ratings in the country.  Their offense, on the other hand is in the triple digits.  If NU can put up 24 or more against that D, I really like our chances to come home with a  win.

The model had a bad week – going below 50% in picks for just the 2nd time all year.  I have started tracking how the model performs when only using 2012 stats, rather than the usual blended method.  On the whole, the 2012-only picks have outperformed the blended since week 7, but only by 1% overall.  Never the less, I’m going to shift to those 2012-only numbers for picks here on out.

UCLA (+3) vs USC:  This could be the best game of the weekend (if you like Pac 12 football), or it could be a total dud.  The model favors USC but only by 1.  I think both teams will be able to score big, and it’ll come down to the wire.  UCLA’s team, fans, etc will all be jacked for this one, and I’m counting on that a little bit.

Wisconsin (-2.5) vs OSU:  Another tight spread – Scuzz Model has UW by 3, but the more I think about it, the more I like the Badgers in this game.  OSU has not looked great vs strong running games, while Wisconsin seems to have found theirs.  I also think the Badgers have been waiting 12 months for this game.  They’re gonna bring everything they have at OSU, and will have the entire stadium backing them up.

Kansas State (-10) at Baylor:  It’s true, Baylor can throw the ball and score some points.  So could Texas Tech and West Virginia, and you saw what KState did to them.  I’m convinced the only way to keep Kansas State from blowing you out is tough D, which Baylor lacks.  As such, I’m thinking the Scuzz model favoring the Wildcats by 30 isn’t all that crazy.

Stanford (+21.5) at Oregon:  I’ll probably regret this pick, but the fact is that Stanford’s offense can and should limit the margin of victory in this game with their ground game and Oregon’s depleted Dline.  This will also be the best defense Oregon has faced all year.   Scuzz model has the Ducks favored by 10.

Allow me to quote myself (and everyone else) from last week:  “Rest assured, the season will not end with 4 (or 6) undefeated teams.”  One day later, Bama and Louisville both go down.  Will two of the remaining four (3) persist, or will they let Bama or some other one-loss SEC squad back into the fray?  Have to think all three teams are at risk this week and next, regardless of the matchups.

Posted on November 16, 2012, in Saturday Morning Stats. Bookmark the permalink. Leave a comment.