This week we get NU’s first big test of the conference season – the Nittany Lions.  I never thought this would be an easy game in 2012, especially being on the road;  nor did I expect PSU to be a threat to win the leaders division at any point this year.   This opponent has been super frustrating to play for the last 3 years (in particular) for NU fans.  The Cats have dominated the first halves of the last two games, only to fall flat after the intermission.   The Scuzz Model has some evidence as to why this year may be different.

We’ll start with this week’s NU projection chart, which show small improvement from last week’s numbers.  Not a lot of surprises, given last week’s results on the field.  Frankly, the biggest surprise is how much the W% vs Penn State has dropped (more on that in a bit):

The distribution chart now shows 9 wins almost as often as 7, with an 8-4 season occurring one-third of the time.   Right now the Scuzz model projects both Michigan and Nebraska to finish with 5 or 6 conference wins… a 9-3 record from NU could be enough to share the division title.

When I saw the game-by-game chart for this week, I was surprised by Penn State.  I knew they had played a great game against Illinois, but at the same time… Illinois sucks.  Three of PSU’s five TDs came on drives that started at the PSU 40 or better.  IL also threw a pick on the 1 yard line.  That one play alone would’ve taken some of the edge off Penn State’s lofty efficiency rating this week (unfortunately the Scuzz model can’t adjust for everything).

Look at how consistent PSU was during the middle portion of last year: hardly any shift for 8 weeks running.  We really dinged them in the pre-season adjustments this year, but that was warranted based on how PSU played in weeks 1 and 2 – right about at the predicted level.  It wasn’t until weeks 3 (Temple) and 4 (Navy) that PSU’s profile started to elevate and stabilize.  Then you see the spike last week for the Illinois game.  If I were a betting man, I would bet this is point represents an overstatement of Penn State’s power.  Illinois was so bad, and PSU dominated them so completely – given all the evidence we have about Penn State (new head coach, mediocre QB, depth issues, key skill position departures),  I have to think the data points from the prior two weeks are more indicative of how this team will play on a week to week basis.

PSU should maybe be on par with Northwestern, who has been ultra-consistent since the Vanderbilt game.  The other thing to point out on this chart… look at how far apart NU and Penn State were when they played one another last year.   It was the low-point for NU in 2011 and there is no doubt in mind that the current incarnation of NU football is far superior to what we watched last time these two teams played.  The possibility that these two teams are much closer statistically than the last two times they met gives me hope that NU can break the mold against the Lions this year.

The model rebounded in week 5 with a decent showing.  Kinda miffed that WVU couldn’t come through for me thought…  love Geno Smith and that crazy Air Raid offense, but man they really have no defense.  Here are this week’s picks:

Kansas State (-23.5) vs Kansas:   I have been no fan of KSU going into this year, but the model is no fan of Kansas.  Dedicating this pick to Charlie Weis.

Texas A&M (-8.5) at Mississippi:   This week I listened to all the ESPN, CBS, and Grantland guys talk about how A&M was running the best backyard offense they’ve ever seen.  Scuzz model likes that offense to outscore Mississippi by 20+.

Rutgers (-8) vs Connecticut:  The Scarlet Knights are quietly putting together a good year.  This week they get a weak Connecticut team and are favored by 8.  Unlike a lot of other teams out there, Rutgers can play D;  they can also dominate time of possession with their running game.  Model has Rutgers by 10.

Ohio State (-4.5) vs Nebraska:  My only hesitation with this pick, is the fragility of Braxton Miller.  He got really beat-up last week, and watching Nebraska’s LBs hit the UW quarterback makes me wonder if Braxton plays all four quarters.  Still, Nebraska faces the best team they’ve played to date on the road where their QB has not performed well and against a team that matches up well against them.   Model has the Buckeyes by a TD.

Wisconsin (-11.5) vs Illinois:  I am leery to make this pick, because the Scuzz model relies so much on the prior year’s stats to project the first third of a new season.  Even still, Wisconsin should dominate Illinois this weekend.  They have the defense to shut down the anemic IL attack, and IL’s defense has shown zero ability to stop anybody other than Western Michigan this year.  The model has the Badgers by 20.

Little change from last week, though Cincinnati enters the fray after their surprising win over Virginia Tech.  At risk this week:  Georgia, Notre Dame, & LSU.  Should either the former or the latter lose, the team that beats them (S. Car,  Fla) will probably take their place in this ranking next week.  Note the shift in Alabama’s chances is primarily a result of Texas A&M’s rise in efficiency after last week.  Do you find West Virginia conspicuous by their absence?  They are 50-50 in a bunch of remaining B12 game (dogs vs Texas and OU), mostly on account of their D.  A big win this weekend could land them on next week’s list however. 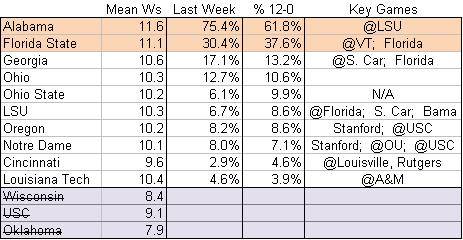 Posted on October 4, 2012, in Saturday Morning Stats. Bookmark the permalink. Leave a comment.