Last week was one of the more enjoyable games I’ve been to at Ryan Field in a few years.  The emergence of Mach V, the performance of the defense against a tough BCS conf foe, and the finish (weather included) really made it a helluva night.  Statistically, the NU D over performed its Scuzz Model profile, while the offense was right on par with expectations (the model forecast a 32-25 Vandy victory).  Yes there was talk about the WR corp being underwhelming, but as we mentioned there should be good opportunity for the offense to shine this weekend against BC.

The result on this week’s model is improved expectations in almost every matchup on the schedule – this is certainly driven by the poor overall performance from other conf teams this past week.  Primarily the Nebraska and Illinois games show improved outlooks. 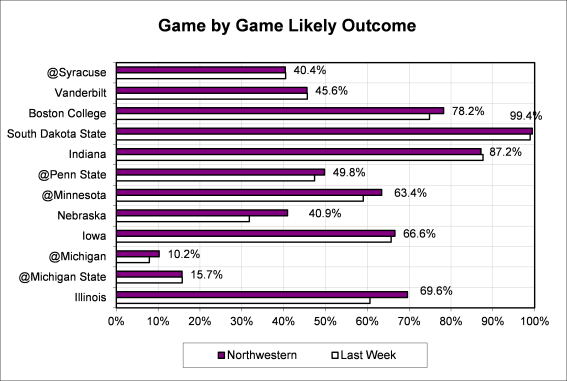 You can also see that the projected wins distribution continues to move steadily to the right – now the model has NU winning 8 games or more in almost 60% of scenarios.

This week the model really likes NU’s chances.  BC’s offense had a ton of players coming back in 2012, but they were a really inefficient unit in 2011.  Their current offensive efficiency rating is 100 points lower than NU’s, while the defense performs about 50 points better.  (Sidenote – for the uninitiated, the Scuzz Model uses offensive and defensive scoring efficiency – points per 100 possessions to rate each teams’ O and D units): 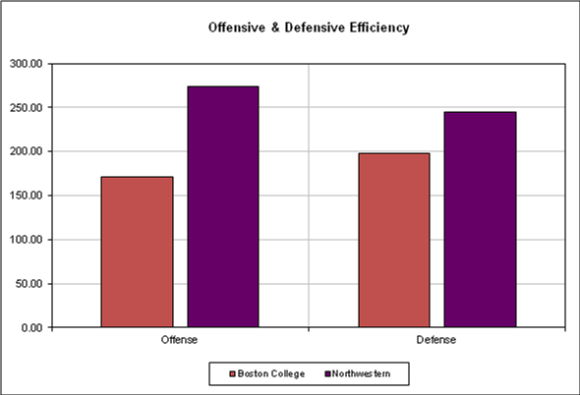 I would expect BC to end up with a better offensive profile this year than you see above, especially after that week one game showed Rettig’s improvement from early 2011.  On the flip side we also saw that BC’s week 1 defense was a shade of what it was with Luke Kuechly last year.  I think the model is close on BC’s overall profile (expected winning percentage around 40%), but hasn’t got the units correct – offense is probably underrated while the defense is overrated.  As such, I expect this game to be a higher scoring affair than last week’s vs. Vandy, and while I feel good about this game I’m not as confident as the Scuzz model (78% winning likelihood).

Foiled by my reverse jinx pick of Illinois (was totally worth it), it was a rough week for the Scuzz model’s picks last time out; but overall the model is still looking real good over 55% vs the spread across all non-FCS games.  Here are this week’s attempts (note we use opening lines for this segment):

Charlie Strong’s team is looking pretty darn good thus far, while North Carolina looked awful in week 1 and has enough trouble following them to be in the conversation with Miami and Penn State.  Scuzz Model is barely over the line with a -4, but I feel good that UL prevails by more.

Weis’ team has looked bad; I don’ t know that they should be 37 point dogs to TCU at home as the model says, but that’s enough of a cushion that I feel good about taking the Frogs.

Ohio, darlings of the non-AQ hopes to break into the already-obsolete-BCS this year have been pretty dominant thus far, and face a not great Marshall team.  Marshall was obliterated by WVU in week 1, and the model likes Ohio by 15 points.

I’m already on the record from the podcast as expecting USC to win this game due to how they matchup vs. Stanford athletically:  I expect the Trojans speed to give them the edge over Stanford physicality.   That said, 9 points seems like a lot… especially to the Scuzz Model which favors Stanford by 2. 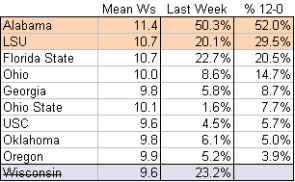 Arkansas’ totally unexpected collapse last week has boosted Alabama and LSU’s undefeated chances (LSU in particular, since their game vs. Arkansas is much closer to a toss-up).  Wisconsin of course has been eliminated with their loss – the hit to the Badgers’ statistical profile has also elevated Ohio State into this mix.  It’s my opinion that the Big Ten is at serious risk of handing a Leaders Division trophy to Ohio State at the end of the year (better than having to hand to Penn State, but embarrassing nonetheless).   The other usual suspects are all still in play… USC’s chances will improve measurably should they beat Stanford this weekend.

Just a note — the Scuzz Model is taking next week off, but will be back to preview the opening weekend of the Big Ten conference season.

Posted on September 13, 2012, in Saturday Morning Stats. Bookmark the permalink. Leave a comment.