Well we sweated out a week 1 win. Feels like 2011, eh? Interestingly enough, NU’s statistical profile in the Scuzz Model improved after last week’s game… here’s why: the defense, as rough as it was, played at the same efficiency level as the team in 2011. The offense, however, was better than previously advertised! That increased offensive efficiency, plus some rough results for other B10 teams, has given NU a boost in the model’s expected outcomes this year… even the chances vs Vanderbilt this weekend went up about 5%.

Primarily, the winning percentages for Penn State and Michigan games have increased – Penn State the most dramatically. Now NU is pegged to get 7 wins (as opposed to 5 LW – winning a 40% likelihood game will do this) and has 35% of scenarios at 7 wins or more. Can they continue the momentum this week??? As you can see, the model gives NU a 45% chance hosting Vanderbilt; Where Syracuse boasted an offensive profile similar to NU in week 1, Vandy’s offense is inferior to the Wildcats. The defense on the other hand, is not. Take a look at what James Franklin has done with Vandy’s units since the beginning of 2011. 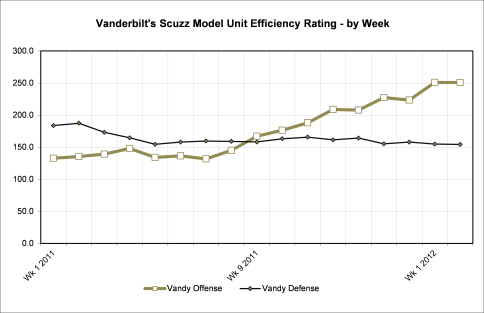 The key pivot is on Offense, where after week 9 of last year they got more efficient each week… Week 9 was the first time Jordan Rodgers’ passer rating eclipsed 100, and he has pretty much remained there since. That said, the offense was not efficient last week – looking worse than any data point on this chart (albeit vs a really tough D).

The solution(s) for winning this week are not convoluted… pressure the passer, more consistently on offense, and don’t give up the big play. I’m really hoping we see VanHoose matched up on leading receiver Jordan Matthews, rather than just playing one side of the field. But that said, Dugar showed last week he can run with big WRs… he just needs to turn and play the ball at the right time. Vandy missed a great opportunity last week, at home, when SC’s quarterback got injured. I don’t think they looked particularly awesome, and unless their team experiences a much greater week 2 jump than the Cats, I think this is going to be a good hard-fought game that comes down to the wire. (T-minus 4 hours on my touchdown in Chicago, btw… am really looking forward to this one).

Iowa vs Iowa State: this is a tight game every year. LY Iowa State won by 3. I could understand favoring Iowa by as much as 3. But 4.5? Seems too much for a team that is thin at key positions, and barely beat NIU last week. Scuzz Model has Iowa by 1.

ASU vs Illinois: this line opened at Even, which is usually where I quote my lines from… but that was based on the uncertainty around Nathan Scheelhause. He is back and slated to play now, so the line has moved to IL by 3. Scuzz Model doesn’t think that’s enough – giving little respect to the Todd-Graham and favoring IL by 5. Let’s call this my “bulletin board” pick for the week… I really hope that ASU sees this and uses it as motivation to knock of the Illini. If so, I’ll be very happy. If not, at least the model will be right.

Michigan State vs Central Michigan: MSU is a big favorite– 22.5 points, but after that offense really struggled to score last week, the Scuzz Model has the game at a somewhat closer 14. Seems reasonable to me that MSU gets up early by pounding the ball, and goes a little conservative to avoid any unnecessary drama.

Oregon State vs Wisconsin: Here’s a line that two weeks ago, you’d have been salivating over… Wisconsin by 8 over Oregon State; the worst team in the P12 North. Yes, Wisconsin looked rough last weekend, and yes they’re going on the road, and yes B10 teams struggle on the road vs the Pac 10. I think that Wisconsin gets it in order this week and drills a much weaker opponent. Scuzz Model has the Badgers by 20.

Texas A&M vs Florida: This one is really tight to call, but it makes a lot of sense to me. A&M is favored by 1.5, but the model thinks Florida pulls this out by 1. I think these two will be pretty similar offensively… the difference is that Florida has an awesome D, while A&M is suspect.

Bama remains the front runner in this week’s “Already Obsolete BCS Title Hunt”. However, despite their big win of Michigan, their stats say the defense slightly underperformed (oofdah) and as such their likelihood of going 12-0 has dipped slightly. The other contributing factor is that LSU was lights out (against a harmless opponent) and has gotten a 5% bump in that head to head matchup on Nov 3. Wisconsin has fallen after looking pedestrian in week 1, while the biggest mover is Ohio! This came up duing our previews – that if Ohio could knock off Penn State, they would be favored in their remaining 11 games. I think it comes down to the Mac Championship, but there is a decent shot that we see Frank Solich back in a BCS bowl this year (paging Steve Pederson… anyone? anyone?). 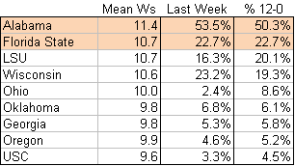 Posted on September 7, 2012, in Saturday Morning Stats. Bookmark the permalink. Leave a comment.