“Plug it into my vein.” – John Lacombe

There is no better phrase to explain how I feel about the onset of College Football this fall.  Whether it was the terrible offseason (for CFB overall) or the unfulfilled promise of last year’s Wildcat team, it has felt like an eternity getting to the start of this season.  Let’s get the ball rolling with the first year’s Scuzz Model Update!

In our marathon preview of the Wildcats two weeks ago, I admitted that this year’s team is not well loved by the model.  Last year’s efficiency rating on offense really looked good, but the defense was in such dire straits that the numbers never really looked great.  The Cats’ efficiency hovered right around .500.  Going into this season, these rates have been hit by a lot of departures on both sides of the ball;  couple that with a pretty tough non-conference schedule and the Cats expected win total comes in around 5. 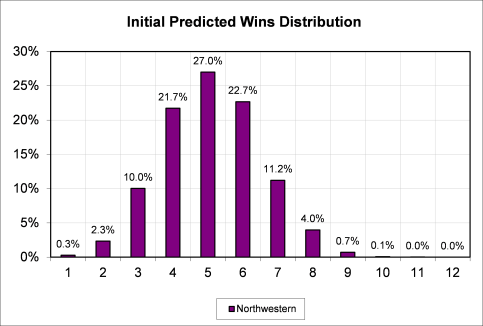 When you break this down by game, it becomes apparent that the non-conference slate is really affecting NU’s numbers.  In what most fans would call 2 toss-up games, and one really tough opponent, the model puts NU at a severe disadvantage: 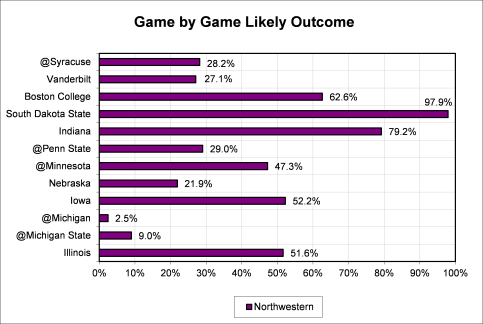 Now, if you’re like me, you believe that this year’s NU team can perform on par with last year’s.  Sure, the schedule is harder, but the quarterback position is healthy, the running back position is really promising, and the defensive line almost has to improve.  If we adjust the model to ignore the returning personnel adjustment for NU, the picture brightens considerably: 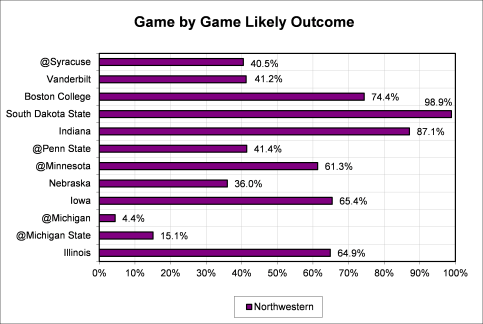 To me, this comes closer to the sniff test (purple tinged of course).  Maybe a little on the high side, but more in-line with what most in the NU community are predicting this year.

The fact is that NU’s make-up this year, particularly on offense, doesn’t conform to the standard tale of college football teams – with so much turnover, you do expect a dropoff.  But considering that Colter was a virtual starter at QB last year, and that the massive statistical losses at WR don’t do justice to the experience and talent in the new WR corp, the optimistic scenario above does not seem too far-fetched.  I really believe that this group of players can recapture the close-game-magic that NU teams (seemingly up until last year) of the past have exhibited, and can elevate that estimate of 5 wins up to 7 or 8.

Matchups Around the Country

There are a couple games this week that the Scuzz Model really differs from the punters (that is English punters):

Clemson (-1) v Auburn:   Unless Auburn has bought themselves another quarter-million-dollar QB, I don’t see how they beat Clemson this week, even with Sammy Watkins suspended.  The Scuzz model sees Clemson as a 8 point favorite (both adjusting for Watkins, AND including that blowout bowl game loss in last year’s stats)

Colorado (-5) v Colorado State:   Sammy called out his home-town Buffs as being terrible this week, and outlined some reasons for hope at CSU this year…. In their annual rivalry CU is a 5 point favorite, but the Scuzz Model likes State by 11.

Penn State (-6) v Ohio:  I won’t call for Ohio to win this game, but I really think they can.  If PSU didn’t have such a home field advantage, I might call it for the Bobcats, who are a legitimate BCS buster this year (not the title game people – just the at large bids).  Scuzz model actually has Ohio by 1, but I may have been over-zealous in my “adjustments” to account for all the personnel losses at PSU.  I’ll put it this way – if the PSU fans are light, late, or laid back, Ohio has a real chance.

Illinois (-10) v Western Michigan:  As I mentioned on the pod, Western Michigan is my 2nd favorite team this week.  Really like their chances to “upset” Illinois (remember IL only won by 3 LY… and Western has the best QB in theMAC… did IL somehow get better by losing top WR AJ Jenkins and several awesome defenders??  Did I also miss when IL somehow generated a home field advantage??).  Throw in that IL might be starting 2 backup safeties and their top corner Hawthorne is hobbled, I LOVE Western’s chance to cover (Scuzz model says -6) and pull out the win.

Alabama (-11) v Michigan:  I don’t like this one bit.  Scuzz model has Bama by 18.  I just think that’s too much, but felt compelled to share the model’s thoughts on this game.  Bama, like NU, lost a ton of talent coming into this year… but a virtual home game against a similarly storied opponent??  They will be firing on all cylinders.  Still, I think Saban is too conservative to beat Mich by that much… still, if bad Denard shows up it could be even worse.

Lastly, as we did last year, we’ll track those teams most likely to finish the season undefeated and make a play for the national title.  As noted above, this championship game is already obsolete… I think the BCS commissioners are going to be very sad they did push through the 4-team model for next season at the latest.

This year’s top teams start off with a no-brainer and a big surprise: 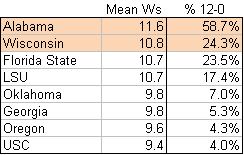 ‘Bama, nuff said.   I’m surprised the model gives Wisconsin this good of a chance.  Note that this does not take conference title games into account, where Wisconsin will likely face their biggest challenge of the season.  I’ll mention that in previous iterations of this simulation, Florida State, Oklahoma, and LSU all snagged that #2 spot.  All have lost key contributors for the season, and I didn’t feel like Montee Ball’s preseason concussion was worth adjusting the model for.  I’ll also note that all three of us picked Michigan State to knock off Bucky in the B1G title game this season.

That said, even if Wisconsin goes undefeated… undefeated USC, Oregon, and probably Oklahoma would leapfrog them on strength of schedule.  The pall of the Leaders division, plus the lack of any real non-con opponents could keep an undefeated Badger team from a shot in the title game this year.

Posted on August 31, 2012, in Saturday Morning Stats. Bookmark the permalink. Leave a comment.